BMT PROJECT – A SPATIAL RECREATION OF HIS ICONIC SONGS

Peter Wezenbeek initiated the project “BMT project” purely out of his love for the songs of Bob Marley. Thus, Peter scratched off the first wish of his bucket list, placed his drums in his studio, and began recreating some of the most beloved Bob Marley hits. This was when the Bobmarleytracks.com project was born.

Basically, it is a re-recording of over 30 Bob Marley songs featuring some of the original Wailers, I-Threes, and an array of musicians from all over the world. Every re-recording is based on original studio arrangements and live versions, as performed by Bob Marley & The Wailers.

Within the production process, Peter used dearVR PRO to enhance the songs with more depth and create a fully immersive spatial audio experience. In the following article, he will give us a first hand look into this fantastic production.

As an entrepreneur of a professional recording studio, I decided to scratch off my no. 1 goal off my bucket list. In 2013, I placed my drums in my studio, and started to recreate some of my favorite Bob Marley hits. Having the luxury of owning a studio with an analog SSL mixing console and several vintage instruments, like a Fender Rhodes, a Hammond organ, and a Hohner clavinet, definitely gave me an extra push to make this project happen. Thus I commenced recreating the songs with the reggae musicians in my own musical circle.

The project was motivated purely out of our love for Bob Marley songs. One big boost came when Junior Marvin (one of the original Wailers!) joined our project and played one of the guitar solos on Lively Up Yourself – isn’t that cool?

The initial idea was to re-record six or seven songs, but that idea went out the window because of the amazing momentum and all the amazing musicians participating from all over the world, like Russia, Denmark, Portugal, Canada, Brazil, Argentina, UK, USA, Jamaica, Belgium, and the Netherlands. I never anticipated this! Currently, we are up to 30 songs. It was such a surprise every time a new musician signed up through our Instagram channel and asked to participate in the project. Although all this started in 2013 as a simple ‘bucket list project’ which I wanted to realize alongside my busy work schedule, people started to show interest in the songs.

They suggested that we should present them to the whole world. Although it was never intended, I agreed on their idea. It was thrilling to know that my project which originated from the sole satisfaction of making the music would now be presented to the public! With a lot of hard work, love, and many musicians’ cooperations, this incredible project has finally come to life. Every song is based on the original studio arrangements as well as many live versions, as performed by Bob Marley & The Wailers. Although currently still in progress, we hope to finish all the songs soon.

With dearVR PRO, I am able to place every element of the song in such a way that we create space for all the instruments. This effect isn’t limited to binaural headphone playback only, it even works perfectly on my loudspeaker setup. It is precisely this aspect of the mix that is so important because we want to experience that live stage sound and feel. It’s as easy as insert the plugin into an individual track and place the instruments and vocals in the correct position. The software precisely calculates how much reverb, eq, and audio level is needed to get the desired effect. Bam! It’s that easy! Should the singer, Hammond organ or guitarist be in your face, or more in the back, up, down, behind you or coming out of your speakers? It’s incredible how smoothly the plugin does its job. The dearVR PRO software is just mind-blowing, and I can recommend it to any mixing engineer. 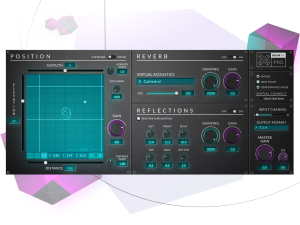 We use vintage instruments as much as possible, such as a Hammond C3 with 122 Leslie, Fender Rhodes, Wurlitzer, clavinet, amplifiers, and stompboxes to maintain the authentic sound and feel. We record and mix all songs with an analog SSL mixing console, Cubase, and lots of vintage outboard gear in our professional recording studio ‘Droomtent’. The mastering is done at Qpoint Digital Audio with analog gear.

ADDING THE SPATIAL EXPERIENCE TO THE REGULAR STEREO WORLD

There is a big difference in using analog panning, eq, and reverb or delays to add depth to your mix versus using the dearVR PRO software to do the job. It’s amazing how easily this plugin achieves the best results. Since my intention was to create a live feel, I used dearVR PRO on tracks such as: the bubbling Hammond organ, Fender Rhodes, lead guitars, percussion and horn section. Instead of panning them left, middle, or right, and only playing around with eq and reverb to get the live feeling, I used dearVR PRO. Just insert the plugin, and move the specific instrument to a particular spot to create a fully immersive spatial audio experience. I could place the horn section to the left of the stage in the back, the Hammond organ next to the drum kit, Donald Kinsey on the lead guitars in the middle, Junior Marvin to the right a little back, percussions to the left of the drums and Fender Rhodes more in the background. The plugin does it effortlessly. The ‘live on stage feeling’ that I wanted to create is a combination of 3D and stereo.

Binaural audio mixing adds so much to the power of a song because it gives the listener the impression that this could be a live recording! It provides depth, spatiality, and enriches the audio experience. You can easily hear the difference wearing headphones, on your mobile device, and even on your stereo loudspeaker setup. The truth is that any mix in which dearVR PRO is used will sound much better.

I will be using this fantastic plugin for every mix I make moving forward. It just enhances the enjoyment of listening to music. In future projects, I will have this plugin in my workflow as a standard plugin.

At the age of fourteen, a friend at school handed this young man a cassette tape. The tape contained the music of “Babylon By Bus” from the then recently deceased reggae musician Bob Marley. While he had never listened to his music before, he started playing the tape on his walkman and it was a mind-blowing experience! Highly fascinated with the drumming style by the drummer of the band, Carlton Barrett, he soon started to mimic Carlton’s style, and played for hours and hours to get every beat precisely right. A fascination was thus born with the legendary musician Bob Marley and his amazing band The Wailers. As it turned out, this fascination would never fade. Today, Peter is an entrepreneur, drummer, and studio owner. “Listening and making music is the best thing”. “Friends and good food make life complete.” “Celebrate Life” Are some of his sayings!